Warning: "continue" targeting switch is equivalent to "break". Did you mean to use "continue 2"? in /nfs/c11/h04/mnt/198607/domains/melllypoo.com/html/wp-content/themes/weh/inc/option/core/extensions/customizer/extension_customizer.php on line 312

Warning: "continue" targeting switch is equivalent to "break". Did you mean to use "continue 2"? in /nfs/c11/h04/mnt/198607/domains/melllypoo.com/html/wp-content/themes/weh/inc/option/core/extensions/customizer/extension_customizer.php on line 326

Warning: "continue" targeting switch is equivalent to "break". Did you mean to use "continue 2"? in /nfs/c11/h04/mnt/198607/domains/melllypoo.com/html/wp-content/themes/weh/inc/option/core/extensions/customizer/extension_customizer.php on line 352

Warning: "continue" targeting switch is equivalent to "break". Did you mean to use "continue 2"? in /nfs/c11/h04/mnt/198607/domains/melllypoo.com/html/wp-content/themes/weh/inc/option/core/extensions/customizer/extension_customizer.php on line 364

Warning: "continue" targeting switch is equivalent to "break". Did you mean to use "continue 2"? in /nfs/c11/h04/mnt/198607/domains/melllypoo.com/html/wp-content/themes/weh/inc/option/core/extensions/customizer/extension_customizer.php on line 383

Warning: count(): Parameter must be an array or an object that implements Countable in /nfs/c11/h04/mnt/198607/domains/melllypoo.com/html/wp-content/plugins/ta-post-format/meta-box/init.php on line 724
 Twelve Hours in London | Melllypoo 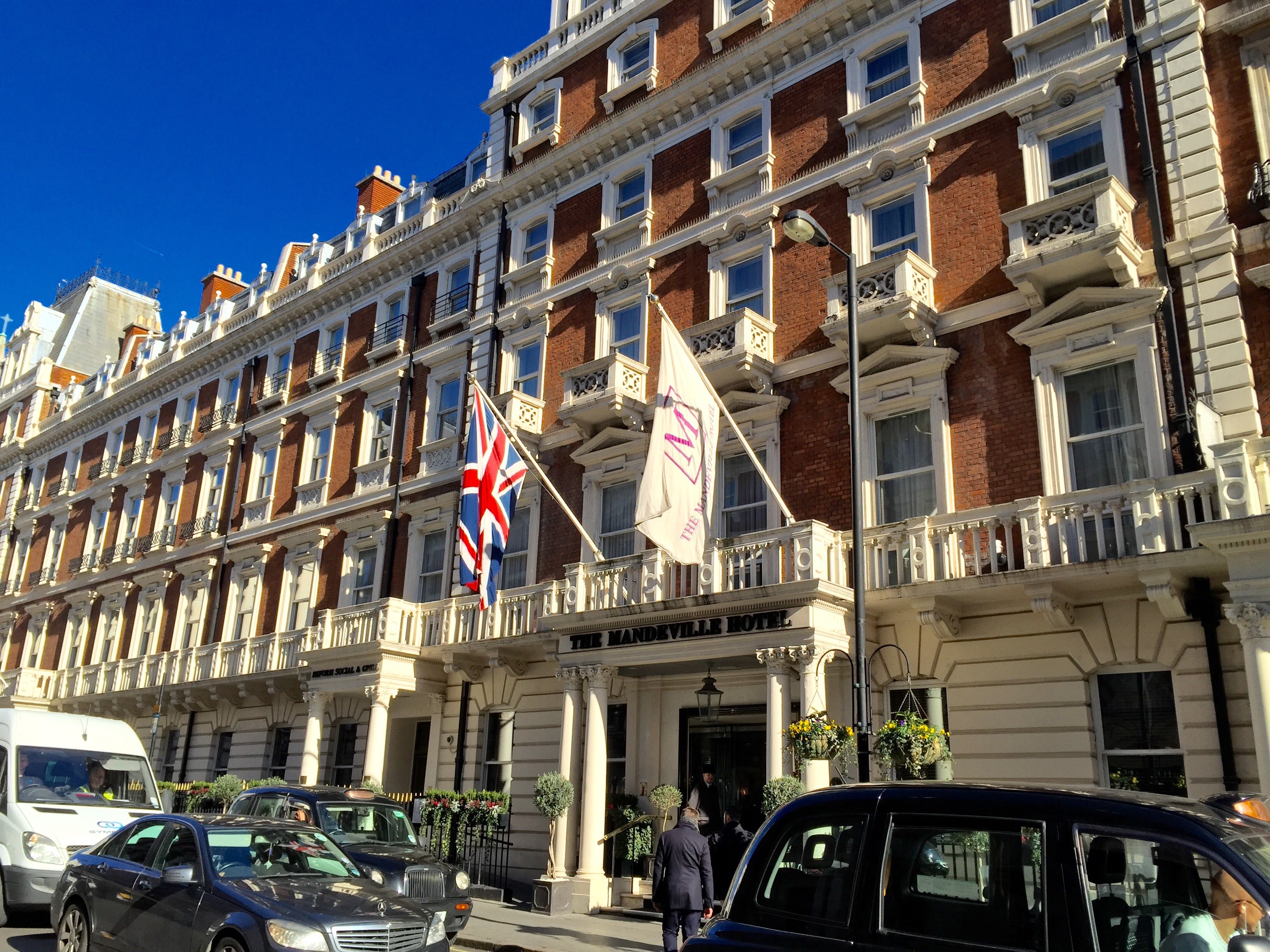 Well, layovers over 4 hours because that means I get to explore an extra city! When booking my flight to South Africa, I made sure to choose the longest layover in London that I could find. Twelve hours- 7:30 am to 7:30 pm… perfect!

This past February, I left the Washington Dulles airport in the middle of a snowstorm. We were expecting 4-8 inches of snow in the same evening, and there I was… watching my plane get covered in snow from the Virgin Atlantic premier lounge. My mind was flooded with negative thoughts and missing my time in London. With some prayer, positive “namaste”s and a glass of Heidsieck champagne… we not only flew out on time, but landed at Heathrow an hour early! 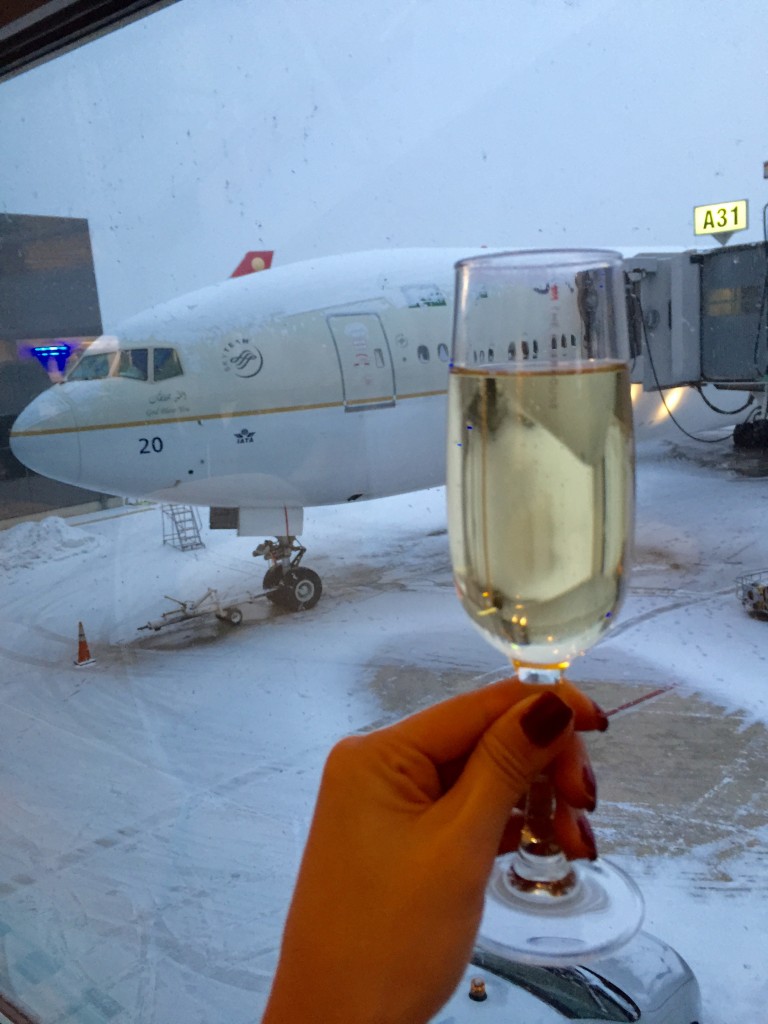 My first visit to London was jam packed with all the must-see tourist destinations. Buckingham Palace, London Eye, Tower Bridge, Big Ben, etc was all seen and done on my last trip. My vision for this second visit was going to be all about EXPERIENCING London and slowing down, taking my time to soak in the city. This time I would be spending the day with a local, my friend Chris who is currently studying for his PhD in the UK.

Even though I wasn’t planning on making any stops to see the main tourist sites, I got an incredible birds-eye view of the main attractions on the flight descent.

Since I knew I would be spending the day in London, I didn’t carry on any luggage and was able to cruise straight to customs and grab a 48 hour tourist visa fairly quickly. American passports don’t require a visa app or fee.

I bolted straight for the Heathrow Express, a train that takes you directly to the city center in 15 minutes! I purchased my ticket from a man standing at the bottom of the escalator holding a bulky credit card machine. I declined buying it from him at first, because well who is he?? Then saw about 5-10 locals buy their tickets from him without batting an eye… so I went on over and spent £35 ($55 USD) for a round trip. Not cheap, but it’s worth it for the time efficiency.

Even though I had breakfast on the airplane at 5:30 am, I was starving once I stepped foot in London. I decided to skip my initial plan of visiting the famous Notting Hill movie’s blue door (280 Westbourne Park Rd off the Ladbroke Grove tube) and Portobello Road Market to head straightaway to breakfast.

I never purchase an international phone plan when traveling abroad. I prefer to use free wifi wherever I happen to see it and not be tethered to reality. Since I’m addicted to Google Maps, I looked up each destination beforehand and screen-shotted the map so I could access it while on Airplane mode. 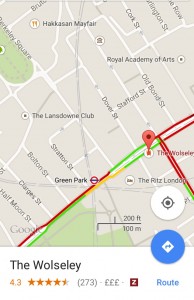 From Paddington, I took the tube (aka the metro, or subway) via Bakerloo line to Baker St. and switched over to the Jubilee line and exited at Green Park. It’s a short walk to The Wolseley, where I had breakfast. I attempted to make reservations, but the online system said there were no tables available. However when I arrived at 10:00 am, I was seated immediately.

Black Pudding is blood sausage and a traditional part of the English (and Irish) breakfast. It’s in the bottom right corner of the photo.

After some amazing people watching at The Wolseley (lots of business meetings and impeccable outfits) I walked off my large meal via a stroll through the SoHo and Mayfair neighbourhoods. It was the first sunny day in a couple weeks and everyone was out and about. At 48F degrees… it felt like summertime compared to the blizzard I just left!

I walked down Old Bond St, down small alleyways, New Bond St, stopping in small shoppes and wishing I was Hermione Granger. 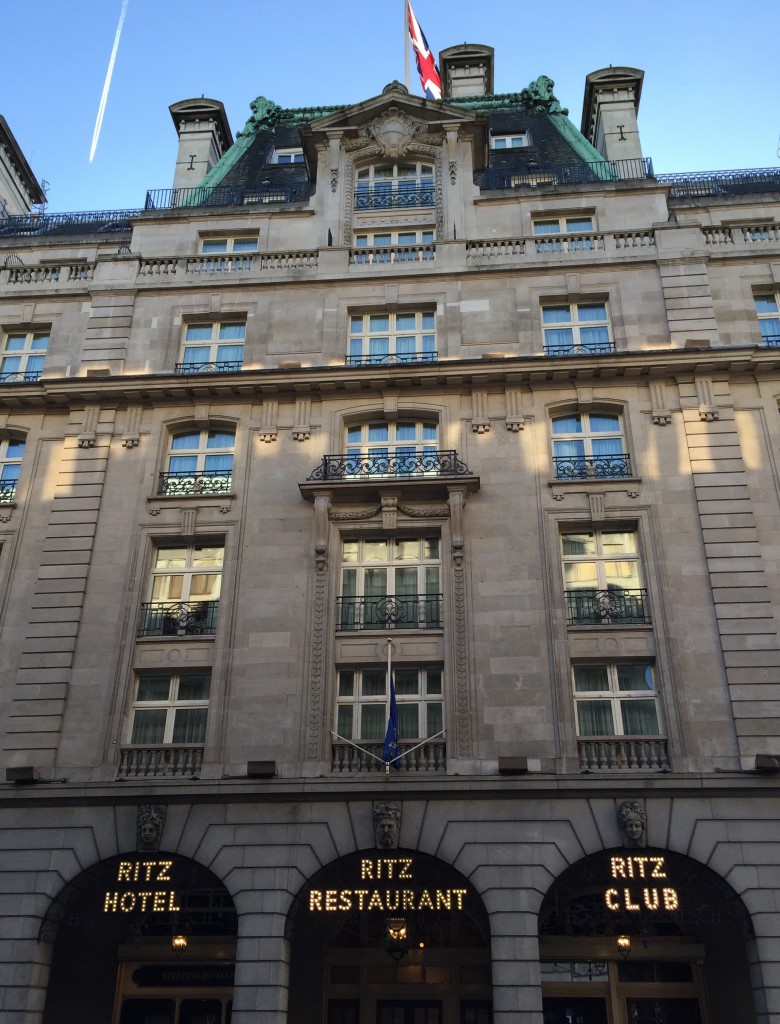 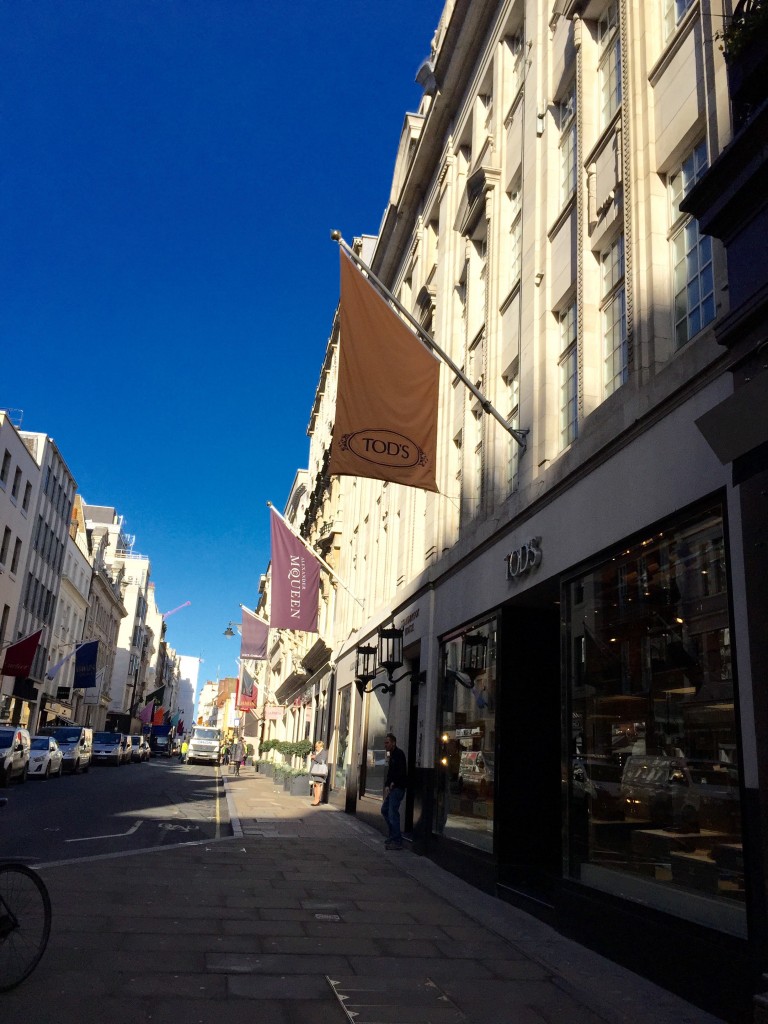 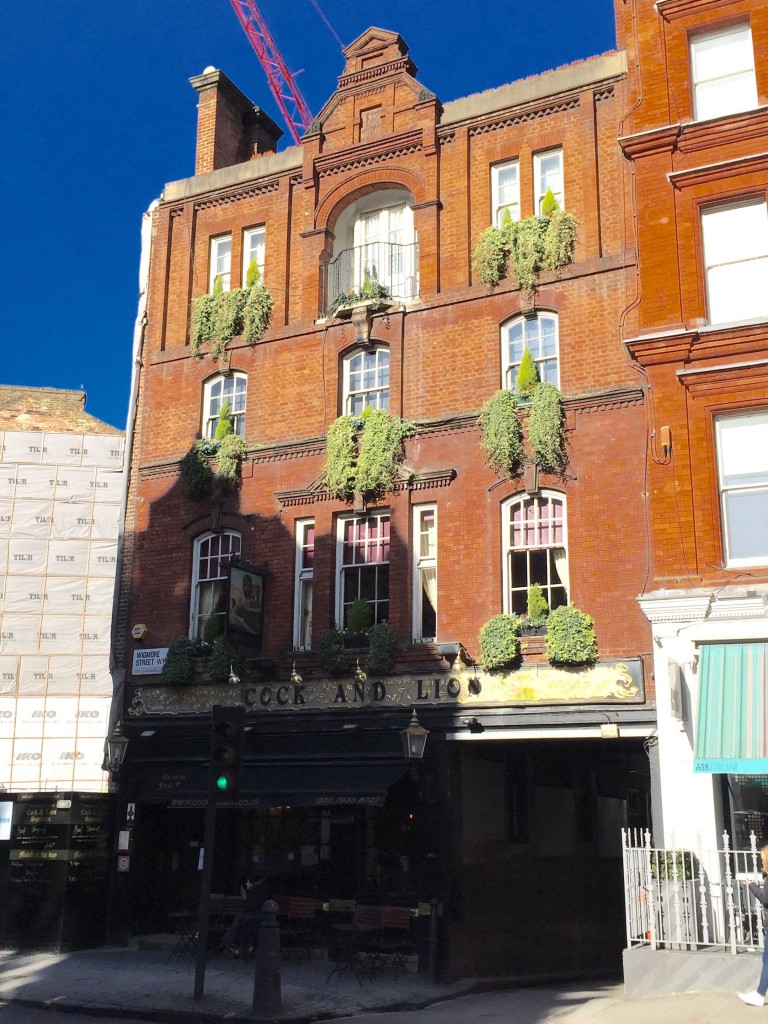 I kept walking northbound until I arrived at The Wallace Collection art museum. It is a national museum (free admission) in a historic house. Being from Washington, D.C., visiting museums has always been a pastime of mine. 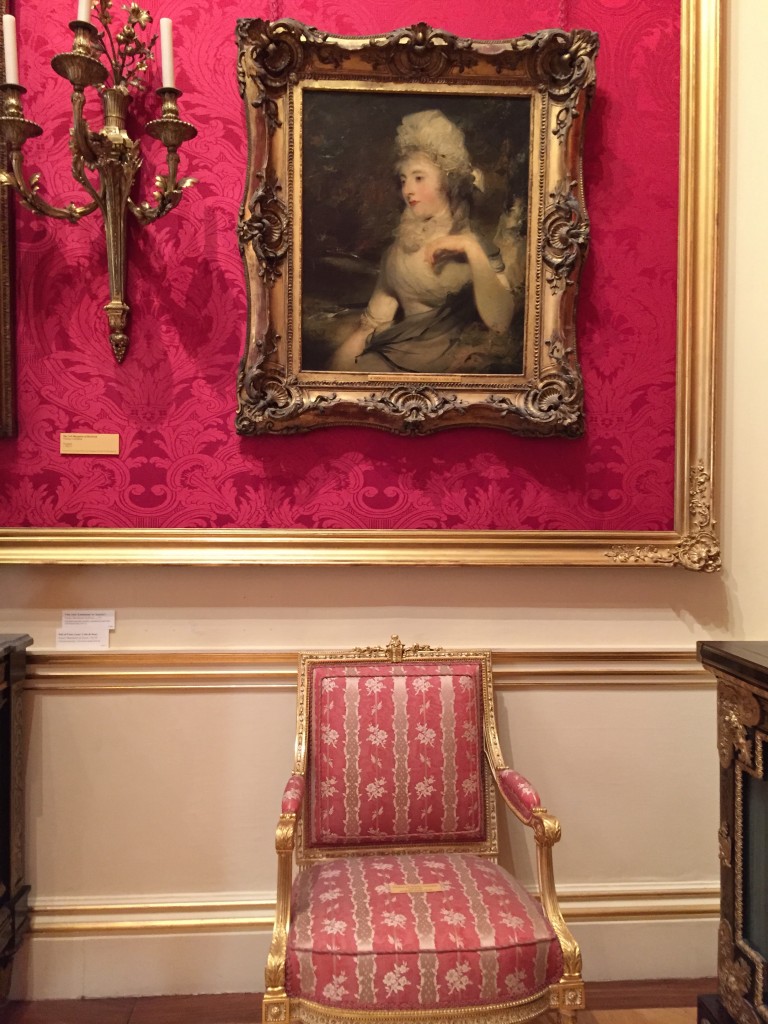 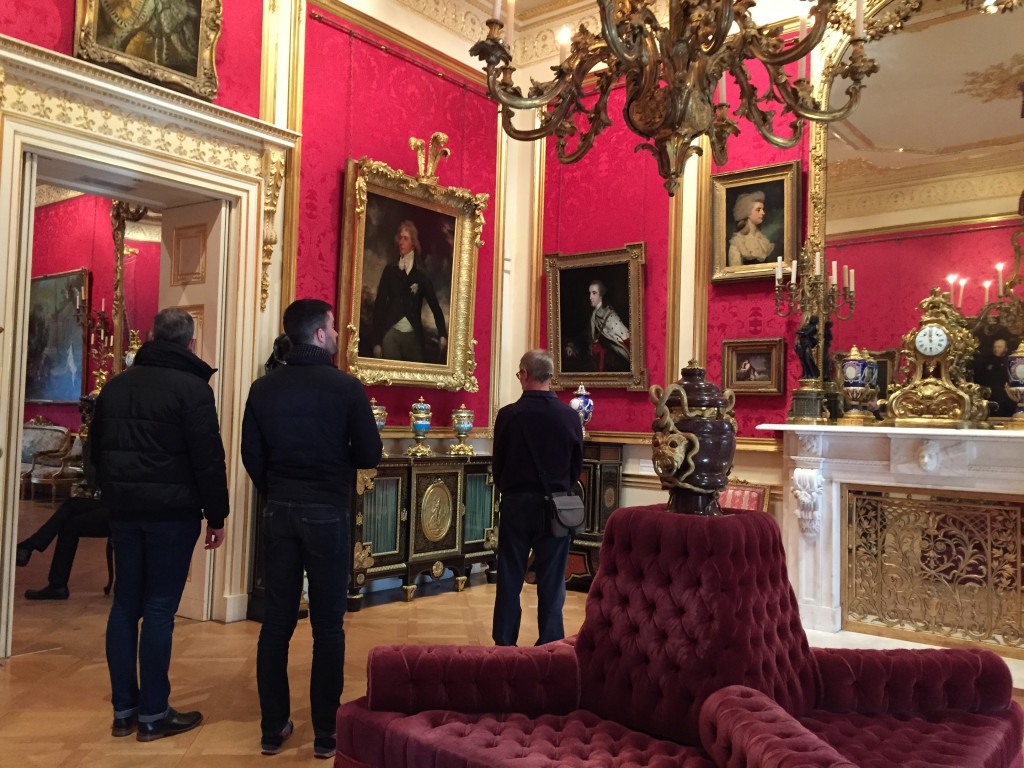 The collection is beautiful and I was pleasantly surprised by the courtyard. I wish I had room left in my belly for more food or even tea, just so I could sit at the cute, cute restaurant. 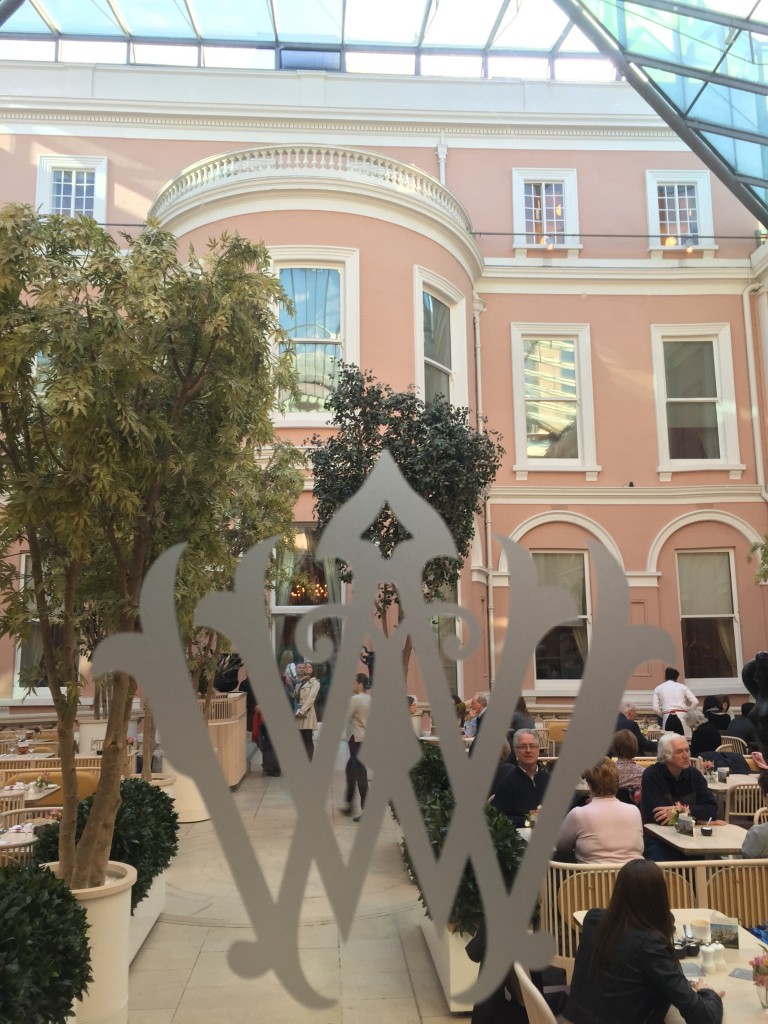 Yes, that is an actual thought that goes through my head: “I wish I had already digested that last meal so I can have my next one already”.

From The Wallace Collection, I walked to the Bond St tube station and rode it to Borough Market to meet Chris. The app called Tube Map is so helpful! 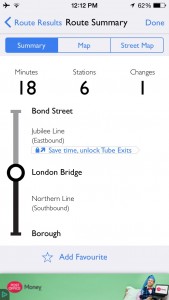 Our next stop was Duck & Waffle, a restaurant on the 40th floor of the Heron Tower. It’s the highest restaurant in London and has the best views to match! There is a bouncer at the door on the ground level (yes at 3pm on a Tuesday) who told us there were not any tables available for lunch, but drinks at the bar were still accessible. Up we went, in a glass elevator (Hey Charlie!) and watched London grow smaller and smaller as we ascended. 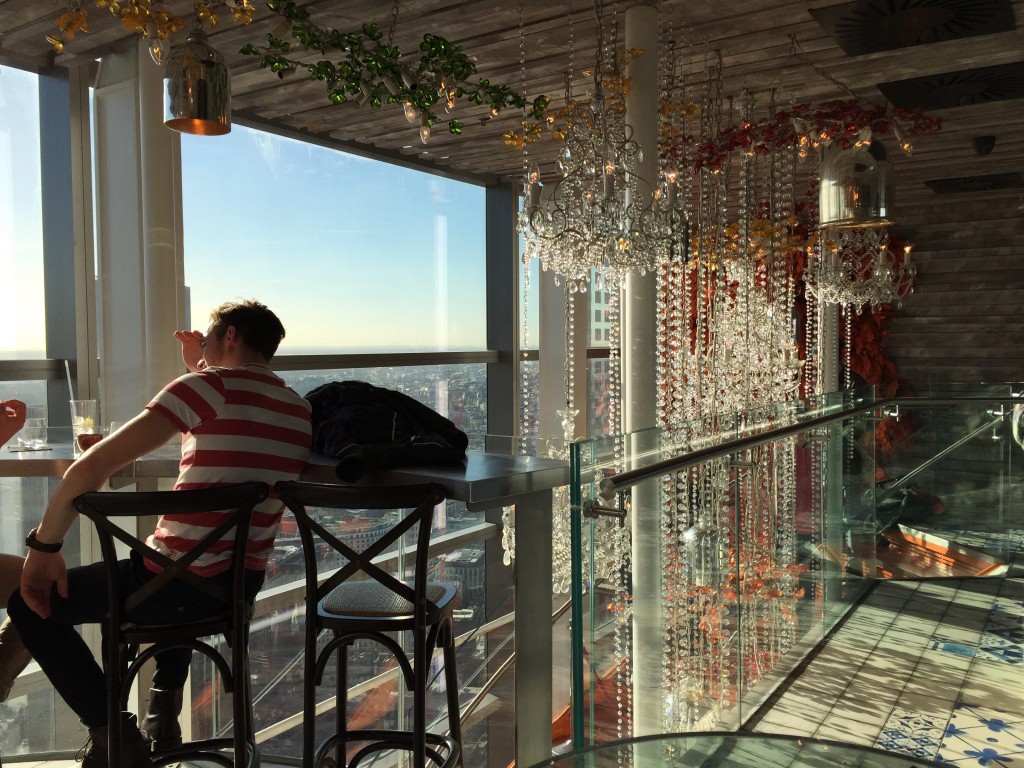 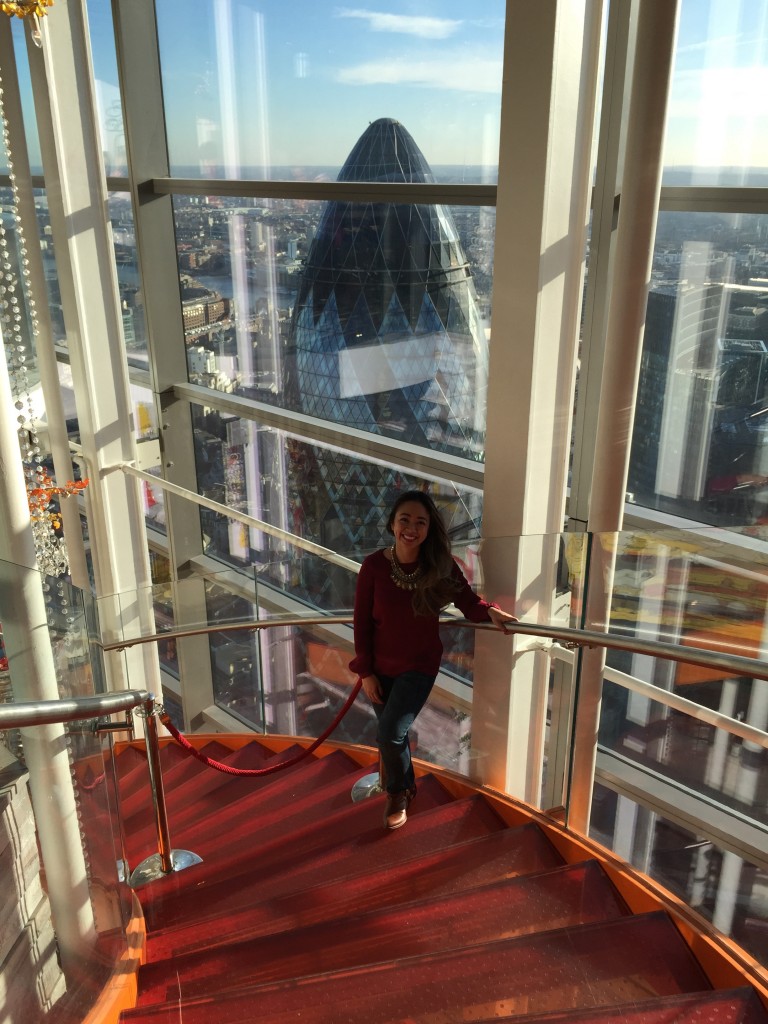 Chic and trendy, the restaurant was equally hipster with graffiti and equally fabulous with multiple glass chandeliers. We were at height with the Gherkin, which is in my opinion the most beautiful skyscraper on earth.

The next stop was the highlight of my visit. I had made reservations at sketch well in advance for afternoon tea, but my true goal was to see the bathroom. Yes, the loo. The bathroom stalls are shaped like egg pods, giant white eggs that house a toilet.

You may think you’re hallucinating, but you haven’t even seen the rest of the restaurant.

Afternoon tea is held in a pink room called The Gallery, with plush pink chairs that resemble pink eclairs. Every wall is covered in David Shrigley’s art, which is so cool and creepy at the same time. The artwork is simple and sarcastic. I enjoyed the humour. Some have compared this experience to Alice in Wonderland. 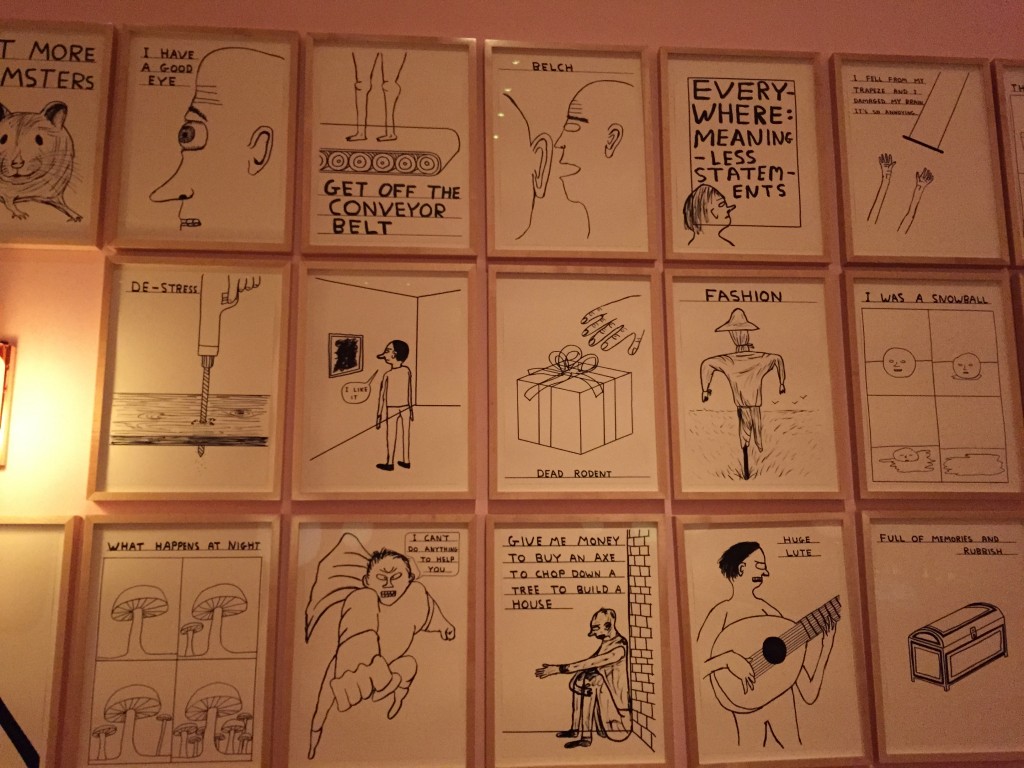 Tea for two is such a fun tradition. Why can’t we implement this in the states? 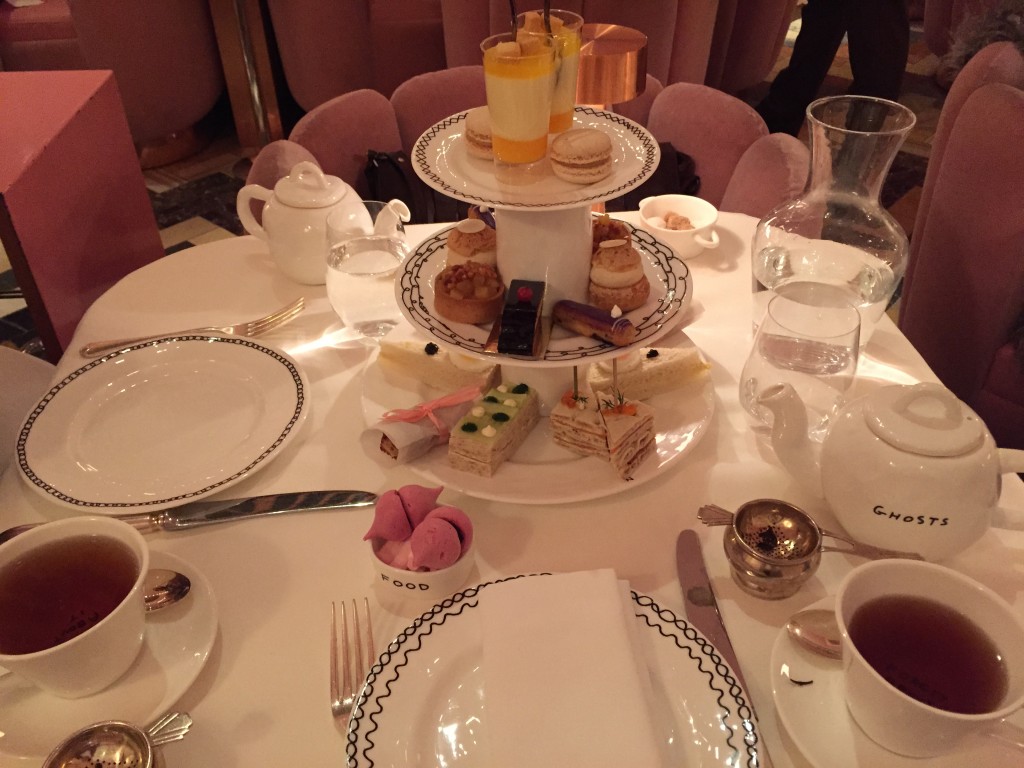 The ceramic tableware also features Shrigley’s artwork and writing, which is also for sale. 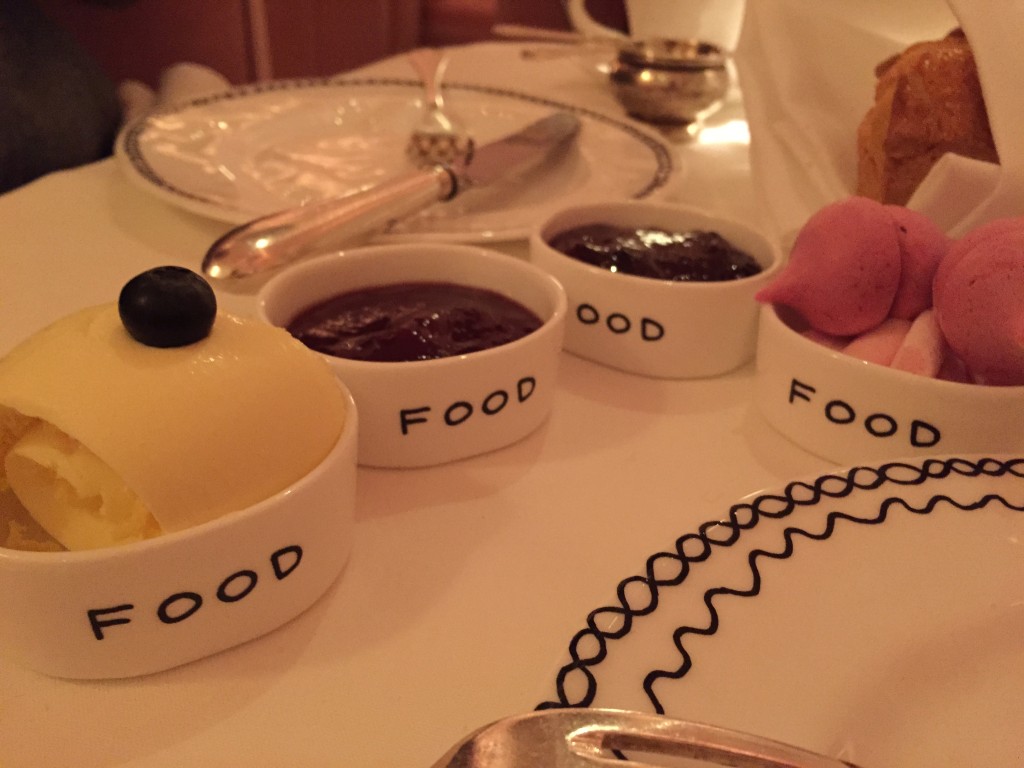 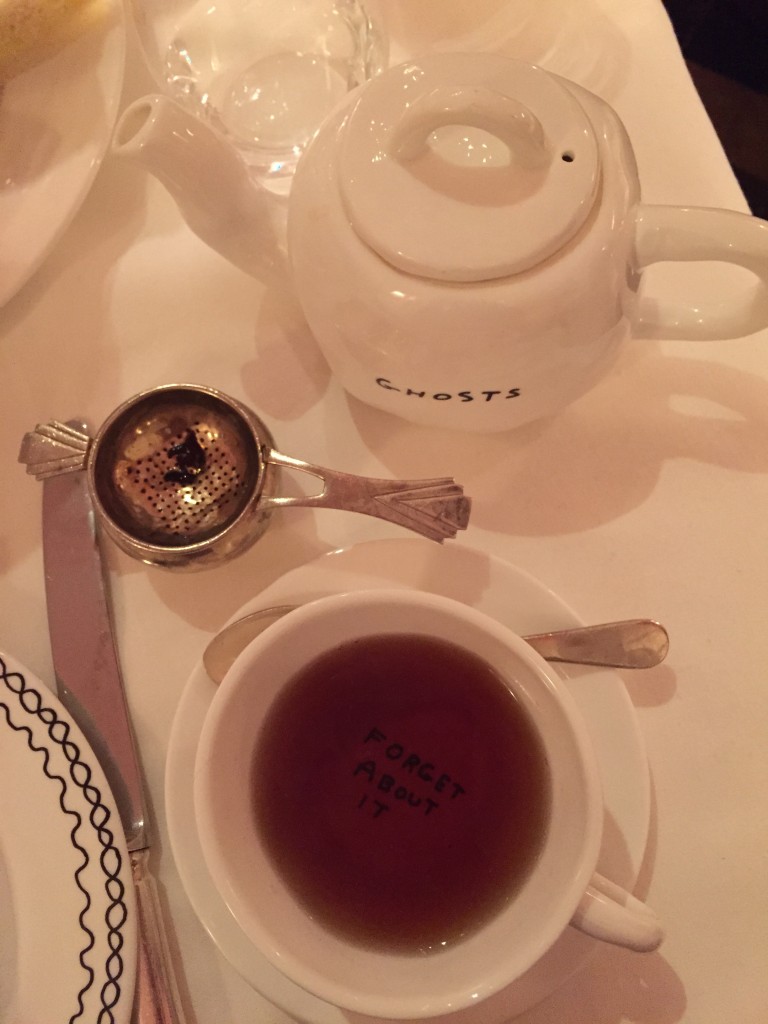 The afternoon tea menu was just as fun as the design around it- quail egg, caviar and cucumber sandwiches, followed by sweets and macarons. 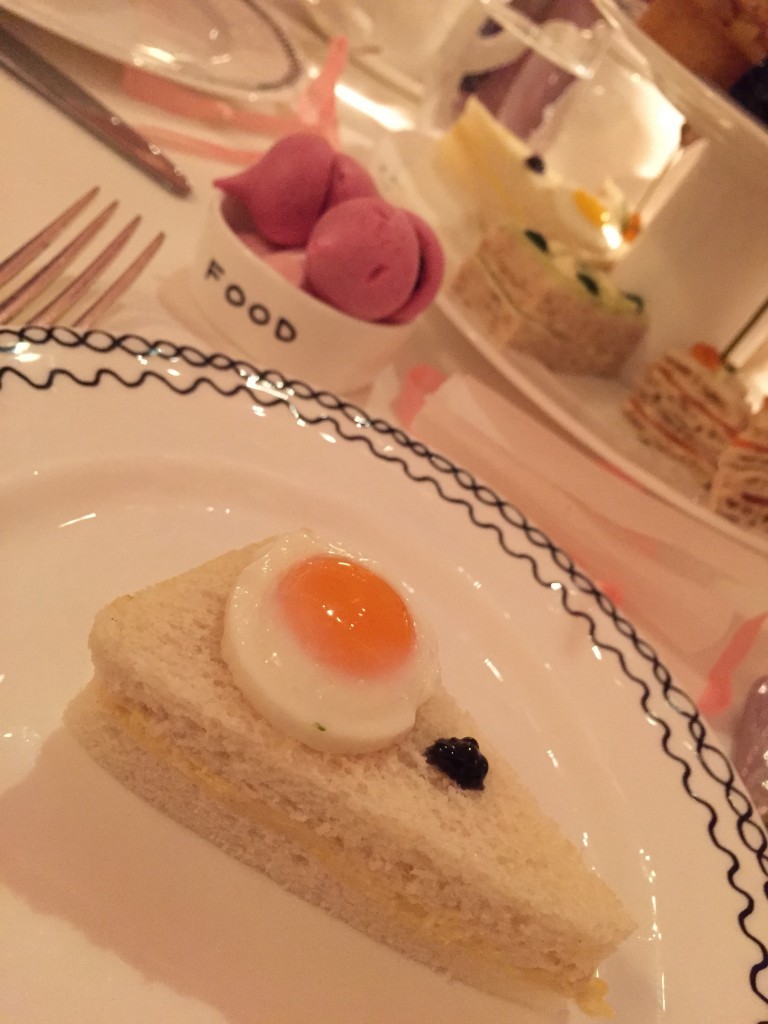 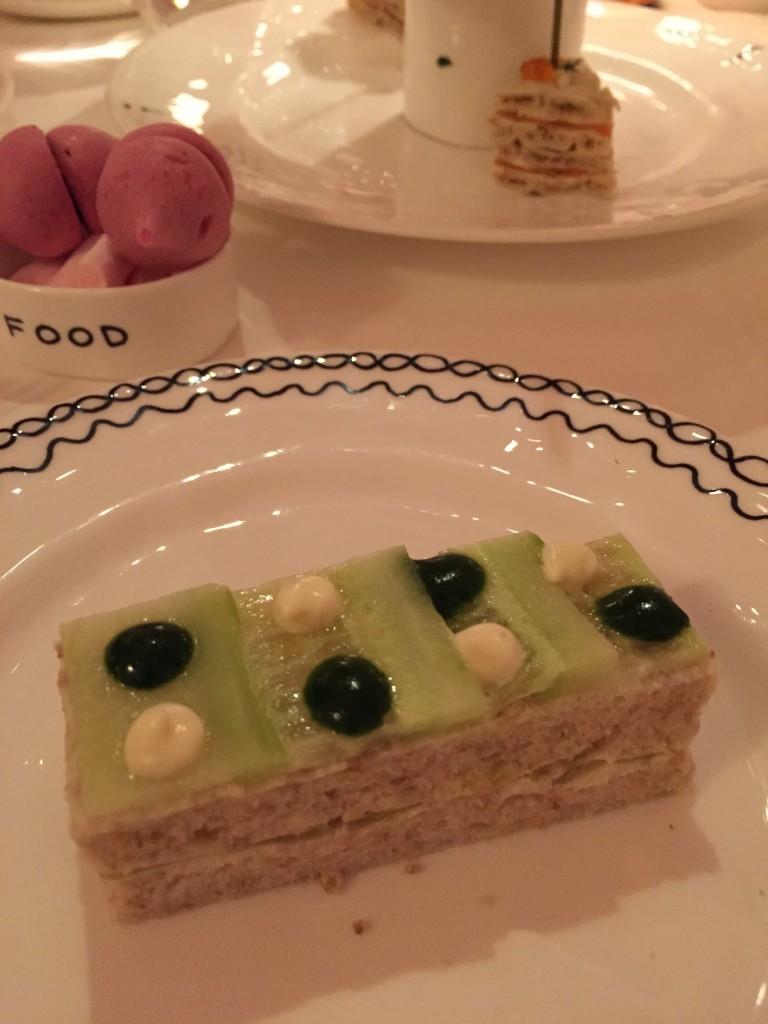 The entire Sketch experience was trippy, but delicious. I enjoyed every moment there, including the servers dressed in scrub-like boiler suits and Converses. Everything was weird… and wonderful!

Somehow through my food coma and feeling super knackered, I found a shower in the Virgin Atlantic lounge and felt refreshed and ready to tackle the long flight to Cape Town.

This was the last day of my 20’s and I believe I properly seized the day… and the decades!

This site uses Akismet to reduce spam. Learn how your comment data is processed.